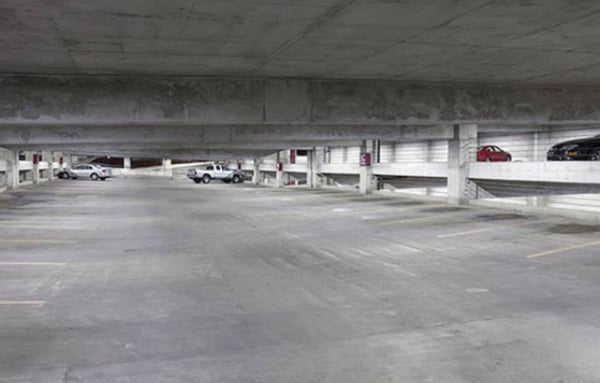 Parking garage lighting is a term used to describe both outdoor lighting and indoor lighting that is commonly surface, pendant, or recessed mounted to a structure’s ceiling, soffit, or overhang. This type of lighting is generally used to provide illumination to areas for vehicle and pedestrian use. Traditional HID parking garage lights, while common, aren’t the most efficient solution for your facility.

Light emitting diode (LED) lights generate and distribute light differently than their HID counterparts. LEDs generate light via a semi-conductor as opposed to the consumption of a “fuel source” like in HID lamps. Additionally, they distribute light using multiple diodes and individual optics versus a single bulb and reflectors within the fixture. As a result, light is more evenly distributed on the intended surface while consuming significantly less energy.

To examine the particulars around energy savings we need to look at the common wattages for HID lighting versus LED lighting. For a typical HID lamp, wattage is between 70 and 400 watts. If we look at the same range for a comparable LED fixture the range is between 24 and 82 watts.

Just by converting your traditional HID lamps to LED there will be a 40%-60% savings in energy consumption. From a cost perspective, a typical LED retrofit will save the building manager roughly $300 dollars per fixture per year in electricity costs alone. Depending on the size of your facility this can be a very significant cost savings.

In addition to the massive costs savings from energy consumption, LEDs can save you money by reducing maintenance costs. Due to the way LEDs generate light, the way they progress through their functional life is much different. Instead of ceasing to function properly once a fuel source is significantly reduced, LED-generated light output degrades very slowly over time.

As a result, the functional life (often in excess of 100,000 hours) of an LED product can be significantly longer than that of a HID Lamp. For example, by converting a conventional 250w HID wall pack to an LED wall pack, a typical facility with exterior building lights can save up to $5,341 over the course of three years in maintenance costs alone.

Finally, while energy savings and maintenance cost savings are important, it’s imperative that lighting performance isn't compromised. This again is where LED stands above the competition. As a result of the multi-point design, LED wall-pack lighting applications provide very evenly distributed light. What this means is that light levels across a given surface will vary less between fixture mounting locations. This is as compared to HID fixtures, which often produce a “bright spot” directly underneath the fixture with light levels decreasing drastically as the distance between fixtures increases.

The result is a more even foot candle distribution from the LED conversion. In addition to the even distribution of light, LEDs are available in a range of CCTs (correlated color temperatures), providing a range of options to increase the visual perception of “brightness."

An LED retrofit would help reduce energy consumption and decrease the maintenance expense while increasing the lighting performance. To learn how an LED retrofit would benefit your organization, reach out to us here at Stouch Lighting. We would be happy to put together a no-obligation assessment to help you understand the return on investment that you would receive from an LED retrofit.