Conrail is seen as the savior of railroading in the Northeastern United States. Railroading in the northeast in the early 1970s was in bad shape. Penn Central was in a record-setting bankruptcy, the anthracite roads were facing sharply declining coal demand, and the entire region was suffering from a glut of redundant lines. Conrail took these faltering operations, and in conjunction with a new federal regulatory environment, became a profitable and successful private enterprise.

Conrail needed a solution to improve the foot candle levels and reduce maintenance costs for their outdoor lighting underneath an overpass. The location was a high abuse environment and required LED light fixtures that could withstand the vibration and corrosion associated with bridge lighting. 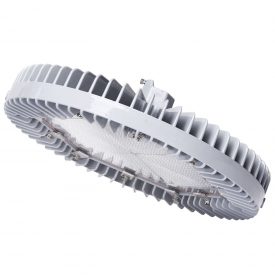 Below are images of the high bay light LED conversion for the railway underpass. Increasing foot candles to improve safety was a primary concern for the customer. Another benefit of the industrial lighting retrofit was the decrease in maintenance costs, as the new LED fixtures included a 10 year warranty.