What is a Hazardous Location Lighting Application?

We have a whole blog post defining what hazardous location lighting can be, including specific definitions of each of the terms above with corresponding examples.

It's important to know that hazardous location lighting is subject to the U.S. National Electric Code (NEC) standards classifying risk levels, and the Occupational Safety and Health Administration (OSHA) groupings may also need to be applied. We have a whole blog post explaining the classes and divisions and groups for hazardous location lighting. In summary, there are three classes, two divisions, and six groups used to divide hazardous locations by risk level and hazards present, so that the correct light can be utilized for required safety.

Below is a more detailed chart outlining Hazardous Location Classifications: 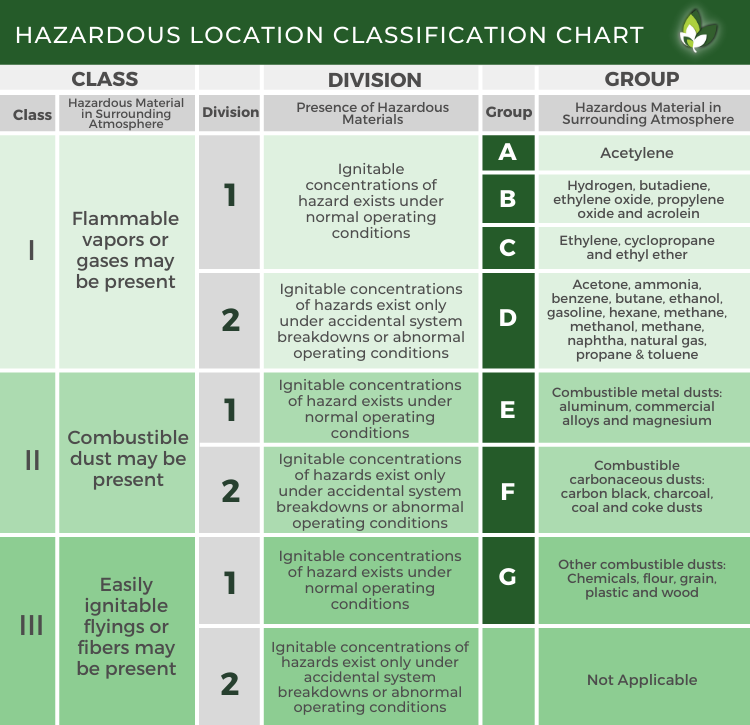 Below are a few image examples of hazardous location lighting: 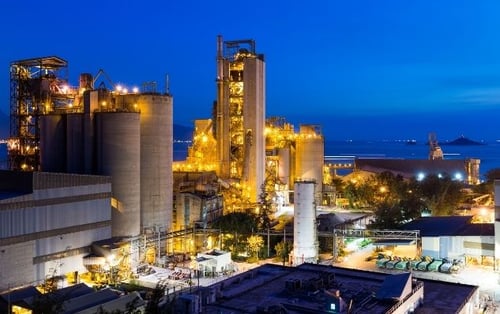 All HID lamps have some inherent characteristics that can lead to issues for those managing hazardous location lighting applications.

Common (HID) lamp wattages used for conventional hazardous location lighting fixtures range from 175 watts to 1,000 watts.  The higher the wattage the higher the light output.  The function of the area being illuminated, combined with the quantity, spacing, and mounting height of the light fixtures plays a role in the existing wattages utilized.  A few 1000w or 2000w metal halide lamps (very common wattages for existing hazardous location lighting) can cost up to $209 and $525, respectively, to operate per year, in electricity costs alone.

Maintenance costs are often a big concern for those managing lights in a hazardous location.  In addition to the potential lamp lifetime concerns, hazardous location fixtures can easily cause interference with the day to day activities of employees and operations when changing out a lamp or a ballast.  It can cost up to $1,200 in labor and material to maintain a single HID fixture over the course of three years.

Depending on the type of HID lamp your facility utilizes, the performance characteristics of your existing hazardous location lighting can vary significantly.  For example, if you are using metal halide lamps you may see light that is whiter, but these types of lamps tend to have accelerated lumen degradation, meaning the light output of the lamps decrease quickly after initial install, and as a result the overall lifetime of the lamp decreases (we have all seen those outdoor fixtures that have “pink” lamps that are barely providing any illumination on the ground).  If you are using high pressure sodium you may see longer “useful” life as these lamps see less lumen degradation than metal halide, but their fuel structure produces a very “orange” light with a very low color rendering index.  So basically you trade a longer life for a poorer quality light, in regards to visual perspective with HPS. 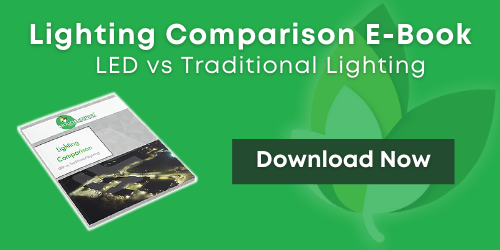 What are some common issues with conventional fluorescent light fixture applications? Fluorescent lighting is also commonly used in hazardous locations and comes with its own set of issues, similar to HID but important to note.

Although the cost of the lamps themselves is very low, maintenance and performance issues often arise over time. Fluorescent lighting is designed to operate for a certain amount of time, each time it is turned on, and thus fluorescent tubes tend to have shorter lifetimes. The more frequently they are activated, the shorter the lifetime of the lamp. Fluorescent lamps are also susceptible to temperature fluctuations and under-perform in colder temperatures, which is especially bad for certain hazardous locations, like a refrigerated environment or lab that must remain at a certain temperature.

For a four foot fluorescent light, tube wattage typically ranges from 28 watts to 40 watts, and an eight foot lamp typically operates at 96 watts. It is common for fluorescent light fixture applications to utilize between two to four lamps per fixture, totaling approximately 160 watts to 112 watts for four foot lamp fixtures and 192 watts for eight foot lamp fixtures. Operating these types of lamps can easily cost up to $200 in electricity costs alone, per fixture, per year.

For fluorescent fixtures, lighting maintenance is very dependent on the operational use of the lamps and fixtures. When operated in cold environments, or operating in a scenario where the lamps are turned on and off frequently, lamp life and performance can degrade drastically in a short period of time. Every time a fluorescent light is turned on, it degrades the cathodes (the fluorescent lamp ignition system), resulting in a shorter operational life of the lamp. Lifetimes range from 10,000 to 30,000 hours for typical fluorescent tube, and it can easily cost up to $1,545 over the course of three years to maintain the lighting in a space utilizing fluorescent light fixtures.

The performance of fluorescent lights can vary based on the TYPE of lamp (T12 bulb, T8 bulb, T5 bulb, etc.). CCT (correlated color temperature) and CRI (color rendering index) can also vary from different manufacturers of these lamps. Ultimately the performance of a fluorescent light fixture degrades significantly over time, and considering that most fluorescent lamps operate in multi-lamp fixtures, what you are left with is a lighting fixture whose performance is dependent on how it is operated by an individual user, and the ability of individual components (the lamps and ballasts within the actual fixture) to maintain their peak performance. If a single lamp ceases to function properly within a multi-lamp fixture, the performance of the whole fixture is negatively affected.

What are the benefits of LED hazardous location lighting?

LED lighting provides excellent benefits for hazardous locations for many reasons (read more here) but especially because of how they GENERATE light and how they DISTRIBUTE light.  Light emitting diodes generate light via a semi-conductor, as opposed to the consumption of a “fuel source” like in HID lamps.  In regards to “distributing” light, LED fixtures commonly utilize “multi-point” sources, meaning the fixtures have multiple diodes with individual optics.  When you compare this to the way most HID fixtures distribute light (with a single bulb and reflectors within the fixture), the result is light that is more EVENLY “distributed’ across a given area. 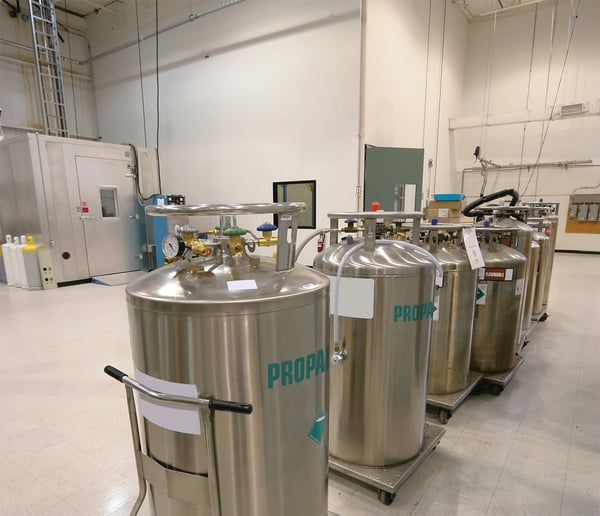 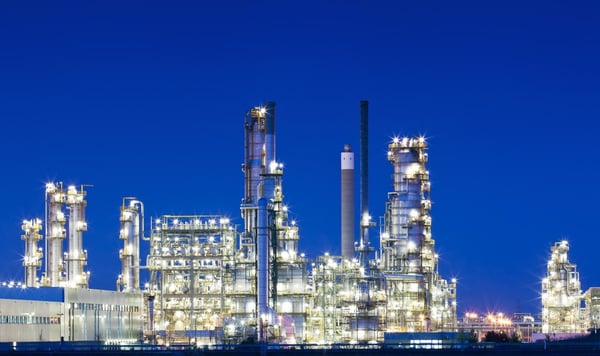 The Three Most Common Benefits of LED Lighting

This blog post provides even more specific benefits of LED lighting in hazardous locations, like its ability to be explosion-proof.

Common wattages for LED hazardous location light fixtures generally range from 95 watts to 495 watts, often resulting in a 40%-60% reduction in energy consumption.  The reason for this can be attributed to the GENERATION comments above, and can result in savings of up $300 per fixture per year in electricity cost.

Again, due to the way LEDs generate light, the way they progress through their functional life is much different.  Instead of ceasing to function properly once a fuel source is significantly reduced, LED generated light output degrades VERY SLOWLY over time.  As a result the functional life (often in excess of 100,000 hours) of an LED fixture can be significantly longer than that of a HID lamp, which in turn drastically reduces the costs for maintaining light fixtures over a longer period of time.

Moving on to the way LED fixtures DISTRIBUTE light: as a result of the multi-point design, LED light fixtures provide a very EVENLY distributed light pattern.  What this means is that light levels across a given surface will vary less as the distance from the pole or fixture changes.  Compared to HID fixtures, which often produce a “bright spot” directly underneath the fixture with light levels decreasing drastically as the distance from the pole increases.  The result, in regards to LED vs HID, is a more even foot candle distribution from the LED conversion.  In addition to the even distribution of light, LEDs are available in a range of color temperatures, and as a result provide a range of options to increase the visual perception of “brightness." 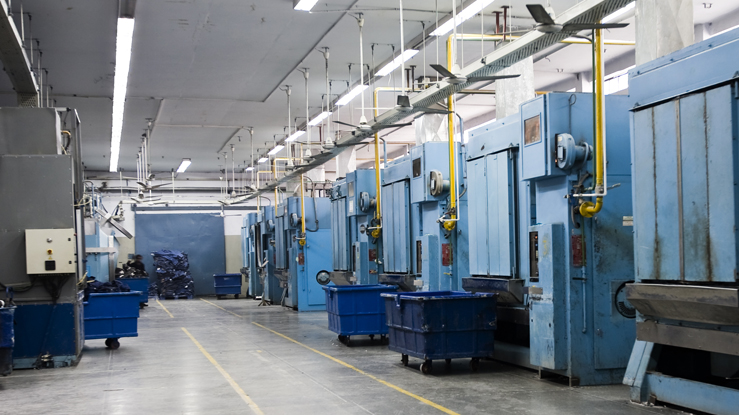 What are the next steps to improve my hazardous location lighting application?

The first step is to speak with an LED lighting solutions provider that is manufacturer-neutral. Why this approach as opposed to the company you may have used for the past several years?  Unless that company has a focus on providing LED solutions, it is unlikely that they will have the performance-focused mentality that is required to obtain the desired results of an LED lighting project for your hazardous location lighting applications.

Prior decades consisted of building facility managers and building owners evaluating product options purely on cost, assuming that all of the options in consideration were equal in quality.  This is not case with LED lighting.

The appropriate partner will want to get an understanding of your desired outcome, not just what specific products they can sell you.  Not all LED products are created equal.  There are different levels of value from different manufacturers for different applications, and by working with a company that has the product expertise to recommend a solution that meets your project priorities, you will ultimately achieve the best results. We'd love to know more about your upcoming lighting project, contact us and we'll get in touch with you.