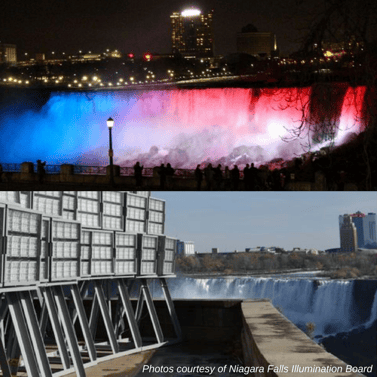 LED lighting has been quickly replacing conventional lighting technology in a variety of applications. It makes sense to use LED lighting in commercial, industrial, exterior, and interior applications, but have you ever considered that LEDs could be a great fit for works of art, or impressive works of nature? Read below to learn about three different instances in which LED lighting technology has been utilized to amplify and enhance the best of nature and man’s creation.

American Falls and the Canadian Horseshoe Falls have long been a huge tourist draw for people around the world. Visitors to Niagara Falls have been spellbound by the majestic sight for many years, and xenon lights previously have allowed tourists to do so at night. This past year, however, the lighting system was upgraded to LED lighting technology, through a collaboration between the Canadian and American governments, as well as LED lighting distributors and electrical contractors on both sides of the border. The new lighting display, installed at Table Rock Centre, has 1400 individual LED lights that are red, blue, green, and white. While both xenon and LED lighting have great Color Rendering Indices, the upgraded LED lighting solution will provide better quality light, with less maintenance required, and will last a very long time (the lighting system at Niagara Falls was designed to require virtually no maintenance for 25 years). To learn more about Color Rendering Index (CRI), read here.

In 2014, an LED retrofit was accomplished at the Sistine Chapel in Rome, Italy. Famous for its amazing frescoes, the Sistine Chapel ceiling took Michelangelo four years to complete, and has wowed tourists for centuries. Thanks to an initiative backed by the European Union, the previous lighting in the chapel was replaced by LED lighting fixtures, which has resulted in a 90% reduction in energy consumption. Additionally, these amazing works of art are now illuminated by higher quality lighting, allowing visitors to have a more enriching experience.

The Saalfeld Feengrotten in Germany is a series of caverns left over from mining operations in the 19th century. An impressive array of stalagmites and stalactites have developed over the years and have become quite an attraction for those awed by natural formations. Previously, the caverns were lit with conventional lighting solutions, which failed to show the subtle but stunning natural colors of the mineral formations. According to Rolf Zavelberg (the lighting artist behind the project), “In the spring grottos, part of the cave system that we illuminated in January 2016, countless subtle gradations in ochre and a range of white, black and blue hues can be seen. The colors of some minerals or rock layers required a cold white light, while others needed warmer white light.” LED lighting technology was able to accomplish this objective, as well as lower maintenance costs and decreasing energy consumption.

You may have noticed a trend in the three examples above: higher quality lighting, lower maintenance costs, and decreased energy footprints. These are three hallmark qualities of LED lighting technology, and Stouch Lighting is ready to help your organization achieve the same objectives. Contact us today!